Posted by Submissions from Sublocal 085 General Council Delegates on October 13, 2016

This was my First General Council, and it was a strong reminder of the great diversity that exists within our union. Attending GC not only underscored the huge variety of jobs that are performed by union members—it also put human faces on all those jobs. For anyone who would question the participatory
and democratic nature of our union or the labor movement in general, I would urge them to attend an SEIU 503 General Council in the future. 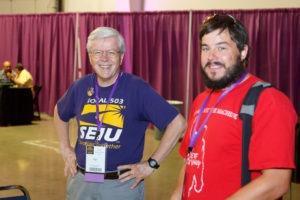 I heard a touching story from a care provider who told delegates about one of his clients who died. The part of the private care industry he works in is not well regulated by the state. He said their facility is short- staffed to the point that clients often wait longer than an hour for assistance getting up after a fall or going to the bathroom. Some clients wait an entire week for someone to help them take a shower.

Hearing the General Council’s support for this care provider and his co-workers’ e orts to organize a union was really touching. It was inspiring to learn about the work and causes that our union supports. It was my first General Council and I spoke in favor of resolutions addressing climate change and democratizing our political endorsement process.

I’ve been to seven General Councils, and this was the best one for me. Being an African-American in Oregon, the kinds of issues that have affected me and my people have rarely ever been spoken about from the podium in front of all the delegates. I am pleased that the Union recognizes our struggle and is willing to confront institutional racism head-on. I’m a proud member of SEIU. 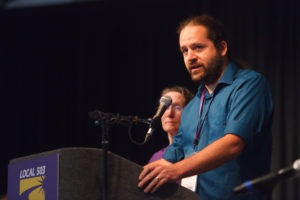 Liz Hahn and I had the privilege of telling the delegates about our recent win against UO Food Services. They responded enthusiastically, and we received a lot of positive individual feedback throughout the remainder of General Council. Everyone we talked to, however, was genuinely outraged that UO Food Services decided to take the food benefit away from student workers.

Equity and inclusion was a major focus at General Council due to the efforts of leaders and
members from all the different caucuses in our union’s Civil and Human Rights Committee. We learned about each other, about dignity and pride, about respect, about valuing each other for who we are in our respective identities and about the importance of union members working together on these important issues.

My hope is that we have these courageous conversations, not only with our brothers and sisters in our union family, but with our family and with our communities. is was SEIU 503 Executive Director Heather Conroy’s last General Council. I have gotten to know her personally through the Civil and Human Rights Committee and as a member of the union’s board of directors. Heather was a powerful leader for us through numerous struggles— at the bargaining table and at rallies. Hers was the voice that spoke for us, about us, and told us why unions must remain strong. It was a hard and bittersweet farewell.

Our Union is 55,000 members statewide, and 2.1 million members internationally, representing working people from all areas of life and all points along the ideological spectrum. Our Union isn’t a top-down cabal of isolated elites making decisions and passing legislation for the rest of us. Our Union is the rest of us. Any member can propose an amendment, a change in policy, a new committee, or a goal that they feel our Union should be pursuing. Every voice matters, but to matter, that voice must be heard. General Council is where your voice can be heard across the state and across the country. It is a chance to witness true democracy in action. 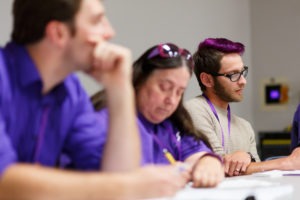 I am so proud to have represented the U of O as a General Council Delegate and contributing By-Laws Committee Member. The U of O was represented by phenomenal delegates; they showed how strong, talented and devoted we are to our members throughout the week and set an example of unity and solidarity. On the By-Laws Committee, I and five other committee members heard testimony on 13 resolutions, discussed them and voted on them; the wisdom and enthusiasm that our members expressed during that process taught me so much about the strength, passion and diverse membership our union embodies. Having the opportunity to participate, contribute and have my voice heard on issues that shape and guide the direction of our union was an irreplaceable experience that my words aren’t able to emphasize enough. I took away enthusiasm to keep pushing for equal and fair rights, not just at the U of O, but for all of us in Oregon and across the nation.