Stand in Solidarity With Student Workers 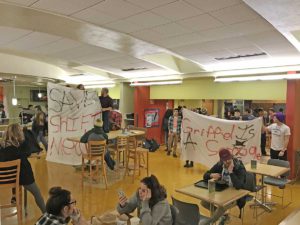 Students who represent the Student Labor Action Project protested Jan. 18 what they see as a pay decrease. People who manage UO Dining Service took away a free meal during a shift for student workers. They value free meals as part of their compensation and many non-student food service workers are afforded them.

As you may know, food service workers are among the lowest paid workers on campus. They earn $25–36k annually for full-time work. A Cook 2 can make up to about $43,500 after ten years of service; that’s based upon an assumption of no step freezes. Student food service workers’ individual incomes are certainly less; they are limited to 20 hours per week.
During early 2016, people who are managers with Dining Service met with people who are food service workers to notify them of a change to their compensation. For years, a benefit of food service work has been a free of charge mid-shift meal, a popular practice in the private sector. Managers claimed they wished to help balance their bottom line by charging workers $1 per meal. During January, they increased the cost to $3.

People who represent management and people who represent the union indicate that the move adds up to a $700-800 reduction each year for a person that works full-time. Union members challenged the take-away; compensation is subject to bargaining. The university backed off on their plans to charge classified workers, but moved forward with the take-away for people not represented by the union—student workers. They now pay every shift $3 for a meal they previously ate free of charge. In effect, university administrators just handed those students a 5 percent pay decrease—at minimum.

“It’s a unilateral cut in worker compensation,” Rio Lehman said to the Daily Emerald. Lehman is the, co-director of the Student Labor Action Project, the protest organizers. “They’re essentially nickel and diming some of the lowest paid workers on campus.”

Lehman started a petition to demand free shift meals be restored as part of worker compensation. More than 600 people signed it, so far.

With their action, people who are managers drove a wedge between student workers and classified workers. That is a problem. Students support us, and we want their continued support. It’s time to return the favor. Please, never forget: students are the reason our jobs exist. We need to support student workers and resist these take-aways.